Visiting the Keats-Shelley house in Rome 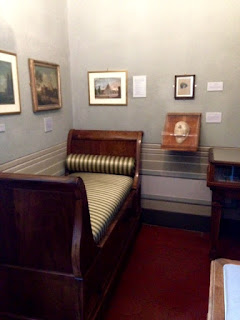 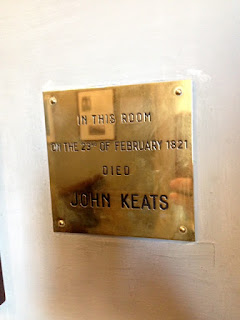 Currently in Rome for half-term, I spent most of the week walking through the ancient ruins of the Roman forum and the narrow picturesque streets of  the Trastevere district. Yesterday, my wanderings took me to Piazza di Spagna, one of the most famous places in the city. As I was standing among the crowd on a warm and sunny Saturday afternoon, I suddenly felt overwhelmed by the aggressive hustle and bustle of the street, and started looking for a more peaceful place. I spotted a welcoming little door just at the foot of the Spanish steps, with a sign carved in a stone plaque that read: Keats Shelley memorial house.

I entered the building and found myself in a shelter of peace and tranquility. This is the house where the famous English poet John Keats spent the last days of his life. He came to Rome in 1820 like many other fellow english Romantics in search for inspiration, but also in search for a better climate which he hoped would cure his tuberculosis. Although he was still very young – twenty-four years of age only – Keats had already produced the masterpieces which gained him recognition as a poet (The Eve of St Agnes, Ode to a Nightingale, The Eve of St Mark, to name but a few). He travelled to Italy with his friend Severn. Upon their arrival in Rome in November 1820, they found this small flat which they shared for a few months. Unfortunately, the mild cllimated of Rome did not help cure Keats’ tuberculosis, and he died in February of the followiing year. He now rests in the non-catholic cemetary of Rome.
The flat is now a memorial to Keats and his fellow poet Shelley, and it hosts a beautiful reference library dedicated to the english Romantics. Keats’ small bedroom with its window overlooking Piazza di Spagna has been reconstructed, and it looks just like it was when the poet lived in it.
If you go to Rome, I strongly encourage you to visit this place. For  those who can only travel through the Inernet, a virtual tour is available here:  http://www.keats-shelley-house.org/en/virtual-tour
And here is a short video introduction to the memorial house:

My favourite links and blogs